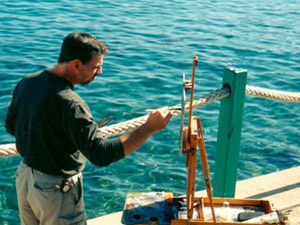 Joseph Paquet was born in 1962 in Patterson New Jersey to hard-working parents of immigrant stock. His father Jim was a railroad man, working as an ironworker, dock builder & mason that also painted and carved wood and stone. His mother Theresa was a homemaker and craftsperson who sewed and knitted.

His childhood was one of being outdoors: wondering, wandering and daydreaming.
“It’s a great irony to now get paid for those things which got me into trouble when I was a kid,” Joe says.

He attended the School of Visual Arts in New York and credits artist-instructors John Foote, David Palladini, James McMullan with inspiring his deep love of drawing.

Later he studied with John Phillip Osborne in Ridgewood New Jersey and was introduced to the Prismatic Palette. Joe states, “John opened a new world for me and set me on a path to painting outdoors – it was incredibly life changing.”

Paquet’s philosophy is one rooted in deep connection and sensitivity to his subjects.
He says, “Because I work directly from nature, each painting is a chunk of my life – a piece of me and record of my experience on this earth.”

Joe was the subject of the October 1995 Washington Post Sunday Magazine feature article. He’s also been featured in the March 2004 issue of American Artist magazine and the July 2005 issue of PleinAir magazine.

Paquet is a member of both the Salmagundi Club and California Art Club and is an emeritus member of the Plein Air Painters of America.